In Saint Petersburg, the Annual General Meeting of Shareholders of IDGC of the North-West, PJSC was held 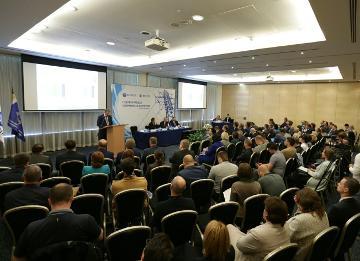 On June 7, 2018 in Saint Petersburg, the Annual General Meeting of Shareholders of IDGC of the North-West, PJSC was held (subsidiary division of Rosseti, PJSC). The participants of the Meeting summarized the results of the financial and business activity for 2017.

In his introductory speech, the Chairman of the Board of Directors of the IDGC of the North-West, Yury Mangarov noted that the Company fulfilled all its obligations to ensure stable operation and upgrading of the power grid complex in seven regions of the North-West of Russia in 2017, the Company continued to maintain a balance of the interests of the Company and its shareholders, improving corporate governance.

Yury Mangarov emphasized that the strategic priorities of the Company are arrangement of conditions for the development of the power grid complex and the enhancement of the electric grid infrastructure availability to the population and business. In the reporting year, particular attention was paid to the reliability of power supply to consumers, including by means of ensuring the required level of technical condition of power grid facilities, taking into account the need for their upgrading, optimizing the costs for operation and maintenance.

The Deputy General Director and Head of the Office of the Rosseti, PJSC, Olga Sergeyeva, noted the work done by IDGC of the North-West, PJSC to shorten the terms and simplify the procedure for technological connection and emphasized the tasks facing the Group of Companies of Rosseti, PJSC.

"Our medium term strategic aim is to establish a digital network, which will significantly improve the efficiency of the power grid and reduce energy losses. Today, Rosseti is developing a strategy for digitalization of electrical grids and is already implementing some pilot projects, in the North-West as well," said Olga Sergeyeva.

According to Denis Orlov, the Acting General Director of the IDGC of the North-West, in 2017, the Company implemented all the planned measures necessary to maintain the operational state of the power grid equipment, the successful run of the autumn-winter period and reliable electricity supply to consumers.

"Thanks to the upgrading of the electricity metering system, the introduction of a unified subscriber base, the use of modern technologies in operation of electricity meters and a number of other measures, we managed to reach the level of energy losses of 6.07%. As of today, this index is one of the best among the electric grid companies in the industry. Moreover, over the past 2 years, there has been a tendency to decrease the amount of receivables for electricity transmission services and to reduce the period of its turnover. The electricity payment level for the reporting year was 102 %," Denis Orlov said.

Information on the results of voting and decisions taken will be disclosed by the Company after drawing up the Minutes of the annual General Meeting of Shareholders.